Sarah Martens
Sarah Martens is the senior food and recipes editor at Better Homes & Gardens overseeing all food content on the site. She is a writer, recipe developer, and editor with more than a decade of expertise in publishing. She got her start writing a food blog and firmly believes it’s not a party without a cheese plate. When she’s not thinking about what she's going to eat next, you’ll find her attempting (and regretting) art projects with her kids, scouring the internet for the perfect pair of loafers, or working to perfect her grandmother’s all-butter pie crust recipe. She holds a B.A. in public relations and marketing from Drake University.
Learn about BHG's Editorial Process
Trending Videos

A double dose of ginger adds spice to this dreamy Thanksgiving pumpkin pie. Pile a gingersnap crust with a fluffy pumpkin chiffon filling and chill until set. We recommend overnight. Just before serving, add generous spoonfuls of homemade whipped cream and sprinkle with cinnamon.

The lattice top on this easy apple pie recipe only looks complicated to make. All it takes is cutting strips of crust and layering them together. Towards the end of baking, brush the crust with an egg wash and sprinkle with coarse sugar. The crunchy texture adds contrast to the juicy filling.

Old fashioned pecan pie is a Thanksgiving staple. Our Test Kitchen perfected the traditional recipe and added a splash of vanilla to the filling. Our version calls for just six ingredients including the pecans. For easy slicing, refrigerate the pie for two hours before serving.

A fan favorite, this Thanksgiving pie recipe is filled with caramel-coated granny smith apples and a sweet cranberry-cherry compote. As one longtime baker shares, "I make this pie every year at Thanksgiving. Everyone loves the complex flavors. (I add brandied cherries to the compote.) Can't do without it!"

Cook your entire Thanksgiving dessert right in your slow cooker ($20, Target). Press the homemade cheddar crust into the cooker and fill with pears, dried figs, and rosemary. Cook on high until the pastry is golden brown and the filling is bubbly. Sprinkle the finished slow cooker pie with chopped pistachios.

This vegan pumpkin pie recipe is every bit as silky and luscious as a traditional slice. We've swapped in coconut milk for the filling and whipped cream but kept the warm seasonal spices, creamy pumpkin, and flaky crust.

Sweet meets tart in this Thanksgiving pie. Top a tangy cranberry filling with piles of homemade honey meringue and torch before slicing. As one BH&G home cook shares, "Made this pie for Thanksgiving and loved it. Was a big fan of the tangy cranberry and had fun using my kitchen torch on the meringue. Also, it was beautiful—a show stopper!"

You can use any pastry crust recipe for this pie (although we're partial to this all-butter recipe). Fill the crust with a homemade bourbon-chocolate filling and bake. Once out of the oven, top the dessert with a homemade honey pecan topping. The chocolate center is so rich and creamy, you don't even need ice cream!

There's a decadent surprise waiting in each bite of this Thanksgiving custard pie. Before spooning in the spiced filling, brush the crust with melted bittersweet chocolate. A sprinkle of a cocoa-cinnamon topping echos the flavors in the filling.

Allow a little extra time to prepare this over-the-top holiday dessert. This make-ahead Thanksgiving pie isn't complicated, but will require an overnight chill in the fridge. Finish each cream pie with sliced bananas, white chocolate cream, and caramel sauce.

Take your sweet potato pie recipe to the next level with homemade pie crust cinnamon rolls. While the bourbon-sweet potato filling bakes, roll up swirls of cinnamon and sugar. Top the pie and cook until golden and caramelized.

This is the best Thanksgiving pie recipe you need in your back pocket. While you can used canned pumpkin, our Test Kitchen recommends a homemade pumpkin puree. You can make your own in just two simple steps. The creamy filling gets spice from cinnamon, nutmeg, ginger, and cloves.

This big-batch Thanksgiving pie recipe serves 24 making it ideal for holiday gatherings with the whole family. Instead of traditional pie plates that serve eight slices, use a 13x9-inch baking pan. You'll need to bake the pie a bit longer than other recipes but the results are golden, flaky, and juicy.

This creamy lemon pie is topped with homemade candied lemon slices. Look for Meyer lemons to create the pie and topping, they're sweeter than traditional lemons. Bake the pie up to two days before serving and keep chilled. Add the candied lemons just before slicing.

A touch of salt is the key to this creative Thanksgiving pie recipe. Adding salted cashews to the crust balances the sweet caramel cream filling. Instead of white sugar, we've used brown sugar in the meringue to echo the caramel flavors of the cream. Instead of torching the meringue, bake the entire pie in the oven till golden and set.

We can't say no to chocolate—especially during the holidays. Fill an all-butter pie crust with a fudgy bittersweet chocolate filling. Before serving, use a piping bag ($4, Walmart) to top the pie with swirls of whipped cream. Drizzle on chocolate and caramel sauce to finish this decadent holiday dessert. 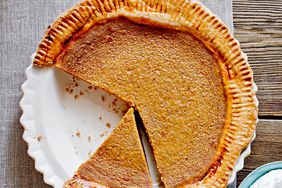 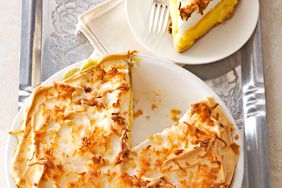 25 Dreamy Cream Pie and Custard Pie Recipes to Swoon Over 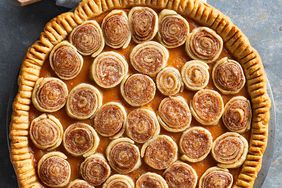 Sweet Potato Pie Recipes You'll Crave Even When It's Not Thanksgiving 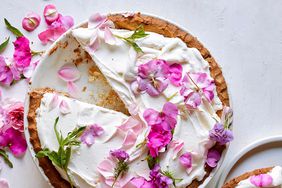 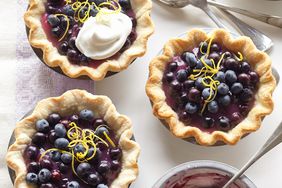 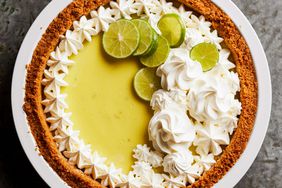 Stunning Apple Desserts to Add to Your Fall Baking List 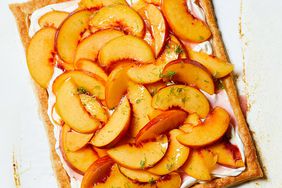 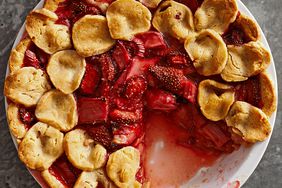