Learn how to braise short ribs like a pro—no special equipment required—just a pot, Dutch oven, or slow cooker with a tight-fitting lid.

Braising, which is actually slow simmering (after browning in a bit of oil or butter), brings irresistibly tender and boldly flavored results to this meaty cut of beef. Because short ribs require long, slow cooking for tenderness and flavor, braising is the perfect technique for cooking them. Most recipes are quite easy—once you've put everything on to simmer, the slow, moist heat does the work. We'll walk you through a basic recipe for braising short ribs in the oven, and then point the way to some of our favorite recipes for your stovetop and slow cooker, too. (Looking at you, Korean-Style Short Ribs!)

Get the Braised Short Rib Recipe

How to Braise Short Ribs

To learn how to braise short ribs, we're going to reference the BHG Test Kitchen's recipe that features a classic braising technique: You brown the ribs, then cook the meat in a small amount of liquid that's flavored with vegetables and herbs. As a bonus, the cooking liquid becomes a pan sauce with just a few extra touches. If you like, you can top the finished dish with a gremolata, a traditional citrus-herb topper, to add a jolt of contrasting freshness to the long-simmered meat. This recipe, complete with an option to serve with polenta for classic short ribs and polenta combo, makes six servings.

Start with 3 pounds of bone-in beef short ribs. Using a sharp knife, trim any excess fat from the ribs. Sprinkle the ribs with salt and pepper.

Finely chop carrots and mince garlic. Set aside. These will be used to flavor the cooking liquid.

Heat olive oil over medium-high heat in a 4- to 5-quart oven-going Dutch oven. When adding the ribs to the pan, the oil should be hot enough to sizzle. Cook the ribs on all sides in the hot oil until browned. Avoid overcrowding the meat during this step—depending on how wide the base of your pan is, you might need to brown the ribs in batches (overcrowded meat will steam rather than brown, preventing the desired deep-brown color from forming). Remove the ribs, set them aside, and drain off all but 1 tablespoon of drippings from the Dutch oven. Preheat the oven to 350°F.

Reduce the heat to medium-low. Add the chopped carrots and minced garlic to the drippings. Cook and stir for about 10 minutes or until the carrots are just tender. Return the ribs to the Dutch oven. Add one beef broth, dry red wine (or additional beef broth), dried thyme (crushed between your thumb and forefinger to release aromas), bay leaf, and salt. Bring this mixture to boiling.

Cover the Dutch oven tightly and transfer it to the preheated oven. Bake for about 2 hours or until the ribs are very tender, adding frozen small whole onions to the pan during the last 30 minutes of baking.

Using a slotted spoon, transfer the ribs to a deep platter; cover with foil to keep warm. Skim the fat from the cooking liquid (use a large metal spoon to skim off the layer of fatty liquid that has risen to the top of the liquid).

If the sauce is too thin, bring it to boiling and cook, uncovered, for about 5 minutes to reduce the liquid (should be about 2½ cups). If following our braised short rib recipe, whisk in Dijon-style mustard and horseradish. Serve the sauce over the ribs.

Pressure cookers like an Instant Pot® make speedy work of braising beef short ribs. Simply heat oil in the cooker, add the meat to brown, pour your sauce over the browned beef, and pressure-cook short ribs for about 30 minutes (instead of hours). Release the pressure, then skim the fat as you would in the other cooking methods to serve over your pressure-cooker short ribs.

A slow cooker also works for braising beef short ribs. The stove top process is basically the same, only instead of putting the pot in the oven, you can let the short ribs simmer all day on the counter. Some slow cooker braised short ribs skip the browning step; that works, too, but for the yummiest results, we recommend browning the ribs before cooking in the slow cooker.

What Are Short Ribs?

Short ribs are squares or rectangles of beef that generally come from the chuck—the shoulder—of the animal. Short ribs are commonly cut into 2x3-inch rectangles, giving you a cross-section view of the layers of fat, meat, and flat rib bones. You can also purchase boneless short ribs. Either way, short ribs require long, slow cooking for tender results because they start out so tough. That's why braised short ribs are common. When shopping for short ribs, look for pieces that are meaty—there should be more meat than fat, and the meat should cover the bone.

Braising is a cooking method in which the meat is browned in fat (such as butter or cooking oil), then covered and cooked on low heat for a long time in a small amount of liquid, such as broth, water, wine, or a combination of liquids. Through the long cooking time, the fat melts away, the tough fibers soften, and the meat's flavors become richer and bolder.

What Pan to Use for Braising Short Ribs

There are pans made exclusively for braising. Known as braisers ($275, Le Creuset), they have shallow sides and wide bases; the latter allows the meat to have maximum contact with the heat source during the browning process. You can also use a Dutch oven or a heavy skillet with a tight-fitting lid. In fact, a key to success is the lid itself—it must fit tightly enough on the pan to prevent the cooking liquid from evaporating. 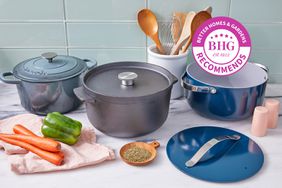 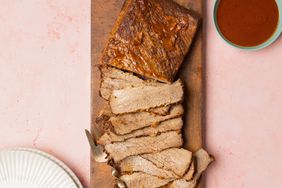 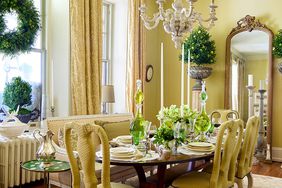 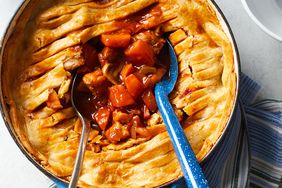 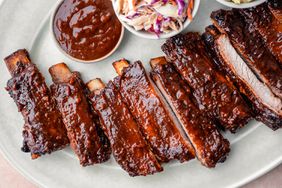 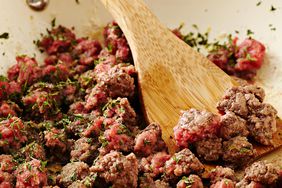 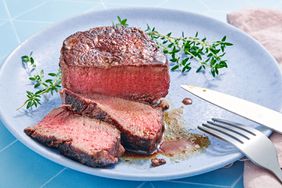 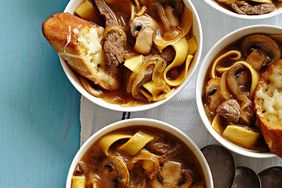 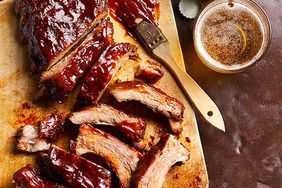 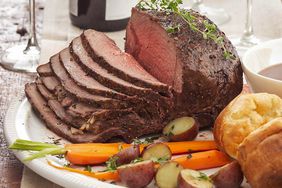