While you can't cure arthritis with food, you can eat your way to less joint pain. Here, dietitians share what the ideal arthritis diet includes.

Arthritis sounds like one condition, but don't be fooled: The term actually encompasses more than 100 related ailments that affect your joints, explains the Arthritis Foundation. It's not something that affects just seniors either. More than 50 million American adults and 300,000 kids in the United States have at least one type of arthritis, such as inflammatory arthritis (including rheumatoid arthritis), infectious arthritis (like hepatitis C), degenerative arthritis (such as osteoarthritis), or metabolic arthritis (gout is one example).

"There are many different types of arthritis, but we can use the same healthy arthritis diet foods for all of these conditions to help ease inflammation and relieve some joint pain associated with arthritis," says Rachel Fine, a registered dietitian and the owner of To The Pointe Nutrition in New York City. (So you'll notice a lot of overlaps in our best and worst foods for arthritis and our top anti-inflammatory eats and inflammation-triggering items, respectively.)

Before we dive into the topic of foods for arthritis, it's worth noting: You cannot cure arthritis through diet alone.

"Pain management needs to be guided by a doctor. It should be a mix of physical therapy, stress management, exercise, anti-inflammatory eating, and possibly surgical or pharmaceutical interventions," says Monica Auslander Moreno, M.S., RDN, founder of Essence Nutrition in Miami.

Now that we have that covered, let's dish on the best arthritis treatment diet (to use in conjunction with those other lifestyle changes).

The Worst Foods for Arthritis

Avoid eating these ingredients and foods to relieve some of the joint pain.

White flour and sugars are acceptable in moderation, yet pervasive in the SAD (standard American diet). "Refined carbs may contribute to the production of advanced glycation end (AGE) products, which have been shown to stimulate inflammation," Fine says. Research also proves that white sugars, such as those found in many breakfast cereals and packaged snacks, also do a number on your gut health, aka microbiome, which can also worsen inflammation.

Similarly, the highly processed sugars (and resulting blood sugar spike) found in sweetened drinks have been associated with higher levels of chronic inflammation. Soda, in particular, has been found to increase arthritis symptoms in women. Just one 12-ounce soda per day increased risk for rheumatoid arthritis by 63%, according to a study published in the American Journal of Clinical Nutrition.

If possible, limit sunflower, safflower, corn, soybean, and grapeseed oils, because they have a higher ratio of omega-6 to omega-3 fatty acids than other oils. Molecules called eicosanoids, which are derived from omega-6 fatty acids, are known to increase blood pressure, trigger the immune response, and exacerbate inflammation, Fine explains.

Oil Substitutes for Cooking and Baking If You Run Out

Processed meats including bacon, sausage, and some deli meats contain more of those AGEs than less-processed options such as grass-fed beef or chicken. Plus these foods that are bad for arthritis tend to be higher in sodium, which can lead to more water retention, which may cause your joints to swell.

One of the leading sources of sodium in the typical American diet, per the Centers for Disease Control and Prevention (CDC), pizza may result in joint inflammation as well. This is especially true if you grab a slice made with a refined carb crust and topped with pepperoni; that would be a trio of the worst foods for arthritis all in one bite.

The Best Foods for Arthritis

Eating well with arthritis isn't only about what to avoid, but it's also what to eat more of. Use this list as your starting point.

Sometimes, the best foods for arthritis are the most unassuming. Mom's favorite dinner side is notable for its nutritious blend of vitamins C and K, as well as the sulforaphane (the part of the veggie that makes it smell a bit when you cook it). Scientists believe sulforaphane might slow the onset and progression of osteoarthritis symptoms, according to the Arthritis Foundation. Bonus points are awarded to the calcium (21 milligrams per cup), which can help bolster weak bones.

"The phytochemicals and antioxidants in colorful fruits and vegetables are both associated with reducing inflammation and disease risk," Fine says. Cherries, in particular, are among the top picks due to their ample anthocyanins (a flavonoid that lends a red or purple tint to plant foods) and other antioxidants that may improve blood flow and potentially reduce pain, Auslander Moreno adds. Remember: The more vibrant the color, the more antioxidants on most occasions, the Arthritis Foundation says.

All green teas are potent in antioxidants, and limited studies hint at the fact that the compounds within their leaves may reduce the severity of rheumatoid arthritis. Matcha ($10, Target) offers a high amount of antioxidants that fight cellular damage, which might make it particularly good at alleviating arthritis symptoms, Auslander Moreno confirms. If you find it to be a bit bitter as a stand-alone powder mixed with water, try it in a recipe, like these matcha-ginger balls.

According to the Arthritis Foundation, eating a 3- to 6-ounce serving of these fish twice or more each week may protect your heart and reduce inflammation all at once. "Foods high in omega-3 fatty acids, specifically regular consumption of wild fatty fish like salmon, herring, sardines, anchovies, or mackerel may improve arthritic symptoms," Auslander Moreno says.

Turmeric is the spice du jour for good reason. The popular sunny-hued ingredient that's found in many curry recipes and trendy golden milks packs in many health benefits per teaspoon. "When you combine curcumin, a chemical compound found in turmeric, with fat and black pepper, you'll likely notice less inflammatory arthritic pain," Auslander Moreno says. New to the warm (it's not hot, promise!) spice? Study up on how to buy, prepare, and use turmeric.

While a holistic approach to arthritis treatment is a must, you can eat your way to fewer aches and pains. If you're looking for one current eating plan as an ideal model of the arthritis diet, think whole foods, plant-based, and well-balanced diet plans that studies have proven to be effective, such as the Mediterranean diet. 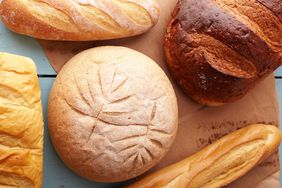 5 Foods that Cause Inflammation, According to Dietitians 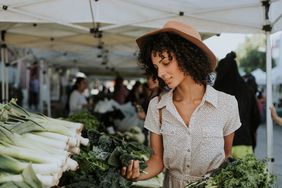 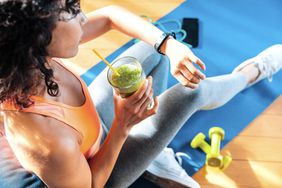