Before and After: Elegant Kitchen Makeover

See how one family remodeled their kitchen for a second time to suit their changing needs.

A small remodel landed this kitchen in the pages of one of our magazines 11 years ago. Then, with a trio of little ones, the homeowners were only able to give the kitchen a quick pick-me-up. Although the makeover resulted in a bright, welcoming kitchen, they were left wanting more as the children grew and changed.

After: Open and Elegant

The homeowners took cues from their elegant, historical home while designing their second kitchen remodel. Marble surfaces reign supreme, as do richly detailed moldings and cabinetry and glossy wood floors. In addition to intelligent decorating moves, the homeowners stole several feet of backyard space to make the kitchen more open and accessible.

The first makeover traded an unnecessary maid's quarters for a much-needed rear entry to the house. But as their kids grew older and the family became more active, the homeowners discovered that a mudroom would benefit everyone more in the long run. Other must-have items on their remodeling list: more storage, greater cooking capacity, and a nearby office/command center.

Jettisoning the back door created space to incorporate a mudroom, which proves more convenient for the bustling family. An additional wall oven was installed near the mudroom, making entertaining a crowd easier than ever. The angled end of this wall of cabinetry guides guests down the hall toward a formal dining room.

Although the quick remodel gave the kitchen a warm, inviting feeling, the homeowners discovered that their design tastes began to change after a few years. With their eyes on a total overhaul, they knew it was time to honor the style of their historical home through the kitchen decor.

After: Range of Beauty

The focal-point range wall displays the homeowners' penchant for tweaking tradition. Marble subway tiles laid in a herringbone pattern are outlined by striking pewter accents. The decorative pewter tiles on the backsplash echo the basket-weave design on the sink. The range hood features decorative millwork that emphasizes the kitchen's traditional overtones.

In addition to stealing space from the backyard, the homeowners installed a bank of windows above the kitchen sink, which visually expands the space. The stylish basket-weave pattern on the apron-front sink connects with the textured tile on the range wall (next photo).

The homeowners doubled their family's food storage capacity by installing a full freezer and refrigerator. Concealed beneath cabinetry panels, the fridge-freezer combo blends in effortlessly with the kitchen's traditional-style cabinets. Counter space next to the appliances offers convenient prep space for a quick bite.

A portion of the old kitchen became a hallway/bar connecting the kitchen and nearby formal dining room. Gothic arches atop the glass-front cabinet doors help distinguish this area from the rest of the kitchen. The bar counter, like all others throughout the space, is topped with dark soapstone.

Learn what elements you need to create a classic and timeless kitchen. 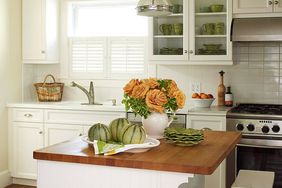 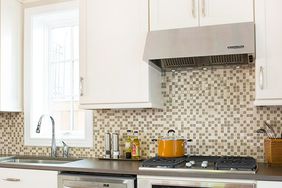 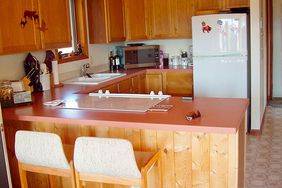 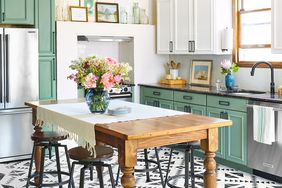 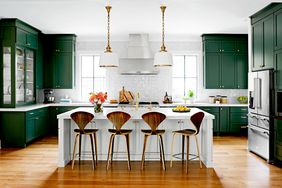 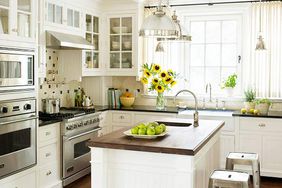 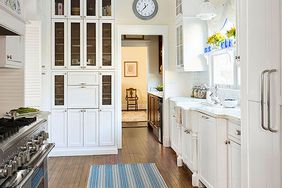 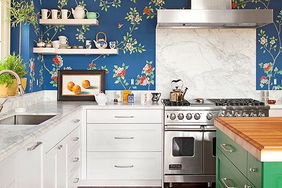 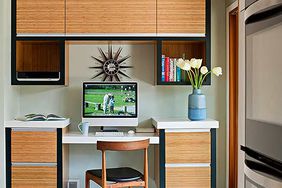 Workspaces and Desks for Kitchens that Add Function and Design 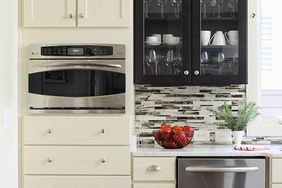 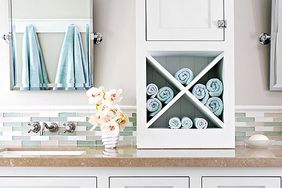 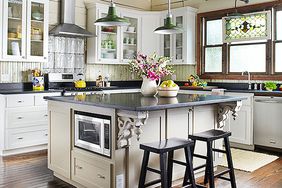 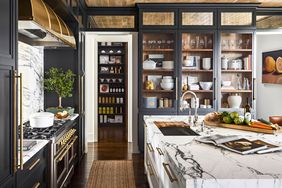