Tudor-style homes are often decorated with half-timbering, which refers to the exposed wood framework filled in with stucco or stone. This updated Tudor puts a modern spin on that classic feature with a trendy black paint job. The deep, inky color also accents the exterior trim and front door, adding distinction against white-painted and exposed red brick.

Unlike Colonials with their boxy, symmetrical shapes, Tudor-style homes come in a wide variety of styles and layouts. The exteriors are generally asymmetrical with dynamic rooflines and mixed-material facades. Gables and windows in various sizes, off-center front doors, and multiple chimneys are common to the style.

Although the style has historic roots, contemporary updates can make Tudor-style homes feel current for this century. Here, an arched overhang above the front door, narrow windows, and overlapping gables repeat classic Tudor architectural features. Crisp white trim and gray shake siding, however, give the facade a fresh, modern look.

Brown, cream, and white tones often comprise exterior color palettes for Tudor homes. These neutral hues complement traditional materials such as brick, stone, concrete, and slate. Front doors are often stained to highlight the natural wood grain, or they can be painted an accent color for an unexpected twist.

Simple arched doorways are a common feature of Tudor-style homes. This exterior also exhibits many characteristic Tudor materials, including brick on the front gable, stone trim, and half-timbering with stucco infilling on the upper level. Leading up to the front steps, stone pavers of various sizes are spaced out in a dynamic pattern to add a more contemporary feel.

This home's classic styling is part Tudor and part English country. A Gothic limestone arch above the entry, copper gutters, and board-and-batten siding are distinguishing characteristics. Cream-colored trim highlights windows and other exterior features against the red brick.

Doorways of Tudor-style homes commonly boast Renaissance detailing. Tudor arches (typically with flattened, pointed tops) are often found in door surrounds, such as the one seen here. This arched limestone door surround accentuates the home's castlelike appearance and lends prominence to the entry.

A curved, red-brick walkway reflects this home's exterior cladding. The path passes through a flower-covered arbor and leads to an arched entrance. Patterned brickwork combined with black half-timbering adds visual interest to the home's facade.

Commonly present on Tudor-style homes, ornamental half-timbering mimics medieval construction techniques. Although timber framing was integral to the structure of medieval houses, most examples on modern Tudor homes are purely decorative. Many different designs and patterns exist, but the technique is most often used on upper stories and around windows.

The facades of Tudor-style homes are often dominated by one or more prominent, steeply pitched cross gables. This home features two front gables and brick wall cladding. Brick became the preferred wall surface for even the most modest Tudor cottages after masonry veneering was popularized in the 1920s.

Although stone trim is common in Tudor-style houses, this home features stone as the primary wall cladding. In this subtype, stucco, brick, or wooden trim frequently covers gables or second stories. A wall also made from stone surrounds the property.

The manufactured stone on this home's facade helps reinforce its Tudor look. Although it mimics real stone, artificial varieties usually come at a fraction of the cost. Keeping with the style, red brick trim defines the steep roofline and arched windows and doorway.

Tulips wind their way through the front yard of this charming brick Tudor-style cottage. A handmade wreath on the front door repeats the shape of the arched door and flanking windows. The wreath features silk blooms that coordinate with the tulip display's color scheme.

Great architecture often embraces its surroundings, but with this Tudor-style home, the formula is flipped. The stately home is embraced by its surroundings, with lovely lakeshore curving around the site on three sides. A slate-tile roof and diamond-shaped offset chimneys distinguish the home's facade.

This new English Tudor-style home was designed to appear old. It was inspired by the traditional architecture of a nearby school and estate. A symmetrical layout featuring a stone-clad exterior, brick chimneys, and chocolate trim boasts timeless Tudor appeal.

Architectural historians will tell you Tudor style has no fixed rules. The English prototype sprang from the introduction of the chimney stack, and the varied look of the style's myriad rooflines and quaint windows was a balancing act around interior sources of heat. On this charming Tudor's facade, crude mortar joints between bricks amplify the home's timeworn appeal.

Brick, stone, stucco, and wood enhance this 60-year-old home's Tudor character. The combination of materials introduces a variety of natural textures and colors to the facade. The decorative half-timbering features curved, diagonal details for a twist on traditional.

Heavy chimneys and steeply pitched roofs give Tudor-style homes medieval flavor. In fact, the style is sometimes called Medieval Revival. The windows of this home include a lot of casements, another characteristic of the style.

The exposed wooden beams and wood front door on this Tudor-style house give it a country quality that inspired its woodland decorating scheme. A tree branch and forest greens keep the decor simple, while silvery stars and tin tree luminaries add a hint of holiday decoration. Diamond-shaped glass panes give the door an antique look.

The windows of Tudor-style homes are often grouped into strings of three or more. They are most commonly located on or below the main gable or in one- or two-story semihexagonal bays, such as the one above the front entrance. Small transoms sometimes top main windows, such as the ones seen on the main level of this home.

The windows on this solarium repeat the Gothic arches and diamond-shape panes that prevail throughout the rest of the Tudor-style home. The solarium offers easy access to the outdoors, opening out to a patio dining setup. A breezeway that connects it to the main house serves as an informal breakfast area.

A combination of brick, stucco, stone, and wood brings texture and dimension to this Tudor-style exterior. The stone flanking the front door repeats on the chimney for a cohesive look. Lush front-yard landscaping helps blend the home into its natural surroundings. 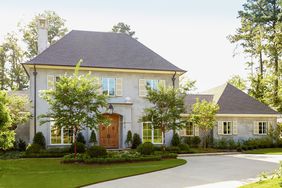 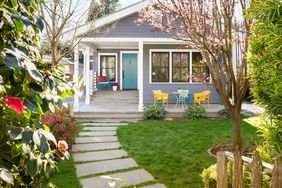 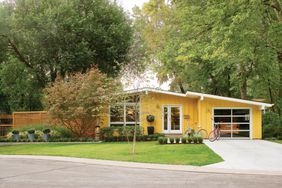 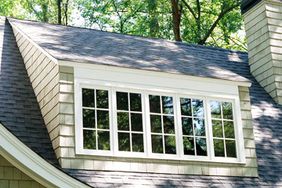 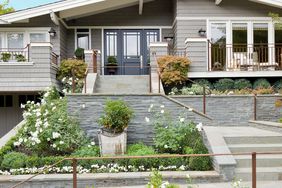 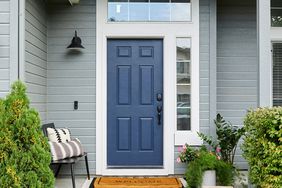 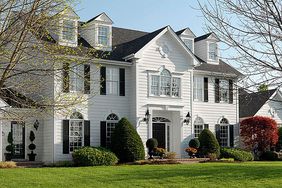 17 Popular Exterior House Styles (and How to Spot Them) 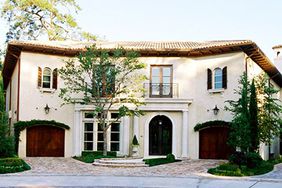