Learn how to hang joists when building a deck with our pro guide.

The simplest and most reliable way to hang joists is to attach the rim joists and header to the ledger and beam, then install the inner joists. Building the outer frame first makes production easy―you can gang-cut all the joists at the same time, mark and install all the hanging hardware, then hang and fasten the joists. Install the joists with the crown edge up.

Unless you plan to cover the header and rim joists with cedar or a similar fascia, select the straightest, most knot-free, and least blemished boards for them. Square the ends before measuring. Predrill all the holes for fasteners so you don't split the ends, and take care to avoid dinging the wood when nailing or leaving protruding screw heads. If a screw won't seat properly the first time, draw it back about 1-1/2 inches and drive it again.

If you haven't marked the ledger and header for the joist locations, do it after you square the frame. Remember that the internal space between the rim joist and the first inside joist is 13-3/4 inches; spacing between the rest is 14-1/2 inches.

Measure and cut the rim joists to length. Set one edge of a rim joist on the beam with the top edge of the other end flush with the ledger. Fasten the boards with two 3-inch deck screws. Fasten the other rim joist the same way. (Install angle brackets after you square the frame.)

Set a square inside the corner at the ledger and adjust the rim joists until they square. If everything is just right, the outer face of the rim joist should be flush with the end of the beam. Tack the rim joists to the top of the beam with a toenailed screw.

Stabilize the frame on the beam with seismic ties and mark the joist locations on the ledger and header. Cut the joists to length and tack temporary flanges to the ends to hold the joists flush at the top. Set the joist on the marks, then slide a joist hanger tight to the bottom and fasten it.

Continue fastening temporary flanges to each joist and with the aid of a helper lower them in place. Fit the hanger to the bottom and screw or nail the hanger on the marks. Wherever the header is bowed slightly have a helper push it toward the joist while you drive the hanger fasteners.

You could install the joists first and fasten the header to them after they're in place. Attach the joists to the ledger using joist hangers, then tack a 1x4 brace across the top of the joists to stabilize them and keep their spacing correct. Measure out from the ledger along each rim joist the distance specified in your plan. Mark both rim joists at this point. Stretch a chalk line across the joists at these marks and snap it. Transfer the marks down the face of the joists with a speed square. Tack a temporary 1x saw guide to each joist so the saw blade will cut just on the waste side of the cutting line. Trim the ends of the joists with a circular saw and face-nail the header to them. Then install joist hangers.

How to Install Blocking

Tack a 1x4 on top of each joist to keep their centers spaced at 16 inches (or on the centers required by your plan). Find the midpoint of the deck (half the distance from the house to the beam) and snap a chalk line across the top of the joists.

Measure each bay (the space between the joists) and cut 2x blocking to this length. Don't cut all the blocks the same size; the thickness of the joists may vary. Install the blocking on alternate sides of your chalk line, face nailing or screwing them. Then fasten the joists to the beam with seismic ties. 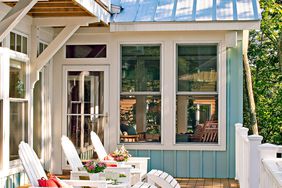 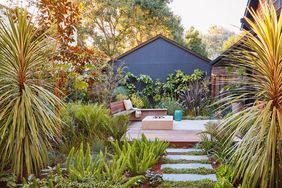 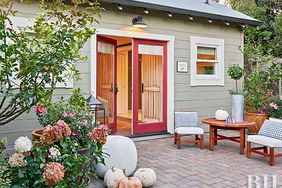 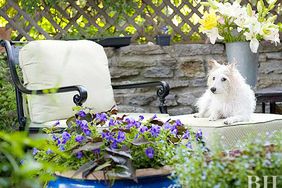 How to Build a Privacy Screen for Your Deck 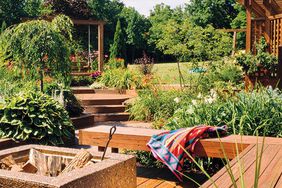 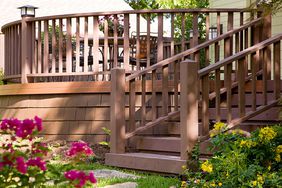 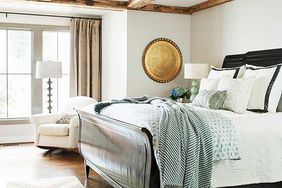