Sherry McKinley's love of secondhand pieces can be seen throughout every inch of her 460-square-foot house.

Sherry McKinley loves old things, so when she began decorating her tiny home—which she calls the Yellow Rose Cottage—she added as many vintage pieces as possible.

"I love to restore old buildings, and if I can't find an old building, my second favorite thing to do is to build something brand new with as much recycled material as I can possibly get," she says. Every room in the Fischer, Texas, home is filled with vintage pieces, most of which she found and restored or repainted to match the theme of the house.

The house is only 460 square feet, but that didn't stop McKinley from turning it into a hardworking home. "It has all the creature comforts of a regular house, except small," she says.

The home has a French-inspired rustic feel to it, in part because of all the found items. Walking into the front living room, guests are greeted with a bright and cozy living room. "The theme of this room turned out (accidentally) to be sort of French," she explains. She found a vintage table on Facebook Marketplace and loved it so much she outfitted the rest of the space to match.

Gold-trimmed antique dinner plates and vintage chairs match the gold detailing on the table, and McKinley painted a two-person sofa to match.

But the highlight of this space is the large windows that open the room to a view of the front porch. "My favorite part of Yellow Rose Cottage is the windows," she says. "These are at least 70 years old, they came from an old house and these are some of the largest panes of glass I've ever seen in a divided-light window."

She explains that older windows often get thrown out when homes get remodeled, but the quality is still great so she rescues and reuses them whenever possible. "It's a window that's so high quality that you can't even buy anything like that today."

Just off the kitchen sits a well-equipped kitchen with a full-size refrigerator, cooktop, oven, and dishwasher. Under an assortment of chicken-inspired decor (a nod to the chicken coop on the property) sits a reclaimed white sink—another one of McKinley's finds. "It probably weighs 100 pounds, and is probably 70 years old," she says. "And it'll last for another hundred."

And while all the plumbing on the property is new, McKinley couldn't resist adding a vintage touch to the bathroom. She wanted to add a new sink to an old vanity that she loved, so she had a carpenter build special holes for plumbing to preserve the functionality of the drawers.

Above the sink, a large antique mirror stretches almost all the way to the ceiling. "I like large mirrors, especially for small spaces," she says. McKinley found the bathroom mirror at an antique shop and knew it would work perfectly for the space. "I think it works beautifully in this house, especially with all the French influence," she says.

She got the bedroom set secondhand, then decorated the bedroom around a favorite duvet cover. And since there are no closets in the house, she found an old armoire and painted it to match the rest of the furniture.

Her favorite part about the bedroom, though, is the walk-out patio. "I love a lot of light, so instead of putting another window here, we decided to make a walk-out patio," she says. "It's just a nice way to walk out and see what the weather's going to be before you get dressed."

All in all, the home took about nine months to build and cost around $95,000. McKinley says it was worth every second. "When I'm in the cottage, I feel such a sense of satisfaction because it was such a fun project and it turned out well," McKinley says. "It's really a highlight of our retirement." 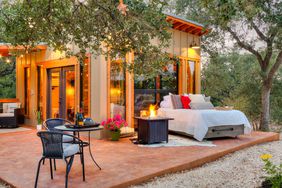 Sleep Under the Stars in This Tiny Glass House 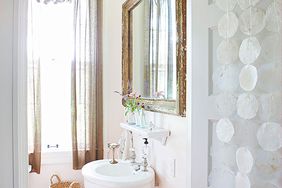 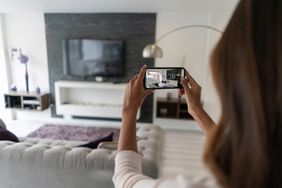 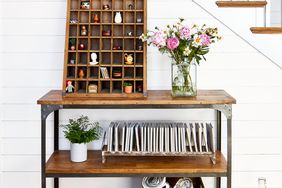 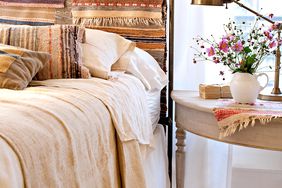 23 Ways to Create a Vintage Aesthetic with Flea Market Finds 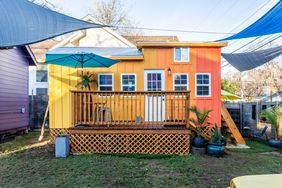