The first time around, Shannon and Falon Terry's Nashville home felt a little like slipping into Shaquille O'Neal's jersey—too big for comfort. So, they left the large home for smaller digs. But five years, two children, and one dog later, their former home seemed to promise the perfect fit—with some design tailoring to suit their young family. "We were lucky to get a second shot at it," Falon says. "To make it exactly right for us."

"The house was very traditional, with formal spaces, dark woodwork, and a winding staircase," he says. "They wanted a lighter, younger look and spaces geared to their lifestyle. Livability and comfort needed to come first."

Higgins established a timeless shell by redoing all the interior millwork. "It's critical to the home's classic yet fresh look," he says. Paneled walls and crown molding define some rooms while others, including the living area, feature less formal tongue-and-groove planks and wood beams on vaulted ceilings.

Out went the grand staircase and light-blocking walls, including one that kept the kitchen cloistered from the living room. "Now everyone can be together," Higgins says. "Everyone feels like they're part of the action." The volume and size of the living room called for large-scale lighting and a colossal fireplace surround—topping out at 7½ feet. "It's so tall," Higgins says, "but it looks right in this room, and it feels right for Shannon and his friends. He was a basketball player. He's a big guy, and a lot of his friends are big, tall basketball players as well. This is comfortable for them."

Furniture also is scaled to the space. "I put in big, deep comfortable seating—and lots of it," Higgins says. Character-rich vintage pieces, including a pair of campaign-style chests (one of which hides a television), mingle with new furnishings and fresh pattern.

"I love the living room draperies," Higgins says. "The fabric puts a younger spin on the tree-of-life pattern with pretty blue and green."

Blue rises to a starring role in the kitchen, where cabinetry wears a rich peacock hue. "All the natural light gave me the nerve to do dark color," Higgins says. Swaths of white marble and subway tile, along with a white oak island, further lighten the space while elegant, brushed brass offsets utilitarian stainless steel.

Instead of a formal dining room, the family opted for a casual eating spot tucked along the kitchen island. A channeled banquette cozies up to a long pedestal table that opens to accommodate a leaf when guests gather for dinner. "It can easily handle 12 people," Higgins says. "Everyone has a seat."

The space previously used for formal dining was reinvented as a wood-paneled lounge. Stained white oak sets a cozy mood accentuated by leather chairs and a modern chesterfield sofa. "We took colors from a painting they already had to build the palette," Higgins says. The watercolor hues wash across textiles and draperies with painterly brushstrokes. A painting by Southern artist Scott E. Hill sets a dreamy mood reinforced by draperies in Harlequin's "Estrato" fabric.

Nestled next to the lounge, a bar dials up the glamour with antiqued-mirror walls, Calacatta Gold marble, and shimmering brass hardware.

Another jewel box space, the powder room tucked under the staircase in a paneled hall drips with elegance from high gloss moss green paint and more marble and brass. Even the room's entry intrigues. "There's no visible door or knob," Higgins says. "You press on a wall panel to go in."

The primary bedroom, meanwhile, serves as a sanctuary— but on a grand scale. Like the living room, its high vaulted ceiling makes the space voluminous. "The challenge there was the scale," Higgins says. "We had to go big with lighting and furniture. The headboard is an amazing 6 feet tall." A custom bed upholstered in Stroheim "Akello Velvet" soars upward. A faux-shagreen desk nestles in the bay window nook.

In the adjoining bath, the designer went big in another way. A freestanding tub sprawls in a sea of luxurious marble. "It looks like I used all the marble," Higgins says with a laugh. Mosaic tile on the floor dovetails with walls clad in magnificent marble on backsplashes and the shower enclosure. Its steel-framed oval window lines up with an exterior window to welcome abundant natural light. 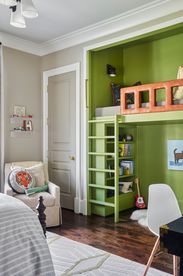 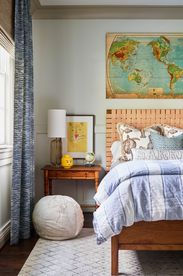 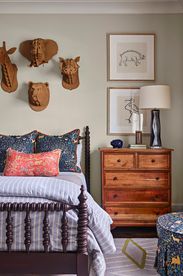 Fun touches also abound in the boys' spaces, which Higgins designed to reflect their personalities. A teak-and-leather bed plays against a map of the world in one room. An odd space left from moving the home's original staircase was reimagined as a lovable green loft in the other boy's room. A splashy Pierre Frey paper and blue penny tile define the bath while a spool bed, whimsical fabrics, and cardboard animal heads from CBSafari energize the second bedroom

"Sly" wallpaper from Fine & Dandy Co. sets a lighthearted mood in the playroom off the kitchen. Higgins had the wallcovering framed like a giant art piece. "We wanted to give them some fun," he says.

"It's a beautiful house, but it's also a really comfortable house," Higgins says.

Higgins painted the pool house, which was originally white, a woodsy green so it would visually recede. "Now it feels like part of the tree line," he says. The structure includes a living area, full kitchen, and bed and bath spaces.

The couple agrees. "I love how the spaces flow—through the house and into the backyard," Shannon says. "It makes our house feel special—like a retreat." That feeling is what matters most. "The No. 1 thing I wanted was for the house to feel homey, inviting," Falon says. "Roger brought in so much warmth with the color palette and layers of texture. Instead of a show house, we have a house that showcases us and who were are as a family-a true home." 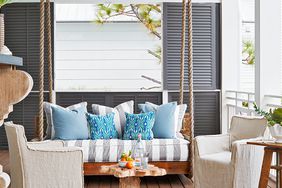 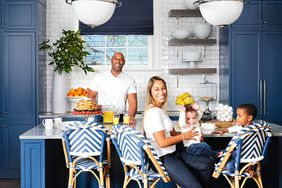 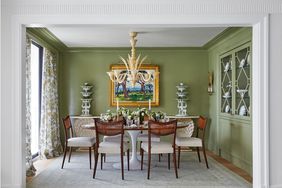 How a Floral Designer Made This Florida Condo a Luxe Retreat 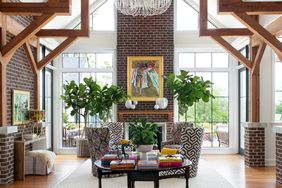 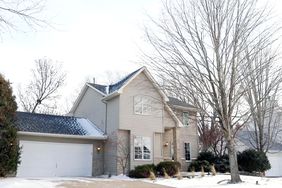 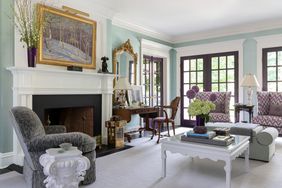 Details from the Paris Runway Inspired This Elegant Home 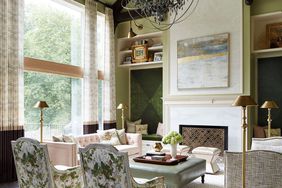 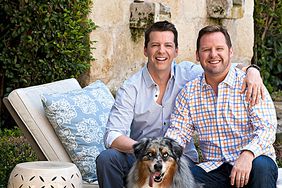