These Restaurant Owners Brought Modern Design to a 1916 Home

When two restaurant pros apply their expertise to a home renovation, blending daily efficiency with stay-awhile comfort is the specialty of the house.

Kit Selzer is the former senior remodeling and projects editor for Better Homes & Gardens magazine. She has more than 30 years of experience covering building and remodeling topics, especially kitchen and bath design and do-it-yourself.

Ben and Jennifer Johnson were fully prepped for their latest project. What they learned about space planning, durable materials, and design details from launching their award-winning Atlanta restaurants helped them turn their 1916 home into a true crowd-pleaser. They bought the house as newlyweds and updated it through the years. With the help of architect Mark Arnold, they renovated again—one last time, they say—to get the rooms and features that will work long-term for them and their sons, Marcus, 15, and Max, 10.

In the kitchen, that meant an island hangout, a gas range with a large griddle (the boys love BFD—breakfast for dinner), and a dedicated cleanup spot. "I wanted the biggest island we could fit," Ben says. He designed one that's nearly 5×8 feet, where the family often watches SportsCenter during breakfast. (The TV is above the wall oven.) The perimeter cabinets were updated with paint. For a matte look, the existing granite counters were honed off-site by contractor Phoenix Renovations.

Ben and Jennifer opened their first restaurant, West Egg Café, in Atlanta's Westside in 2004 and own The General Muir and five other restaurants with two partners. Experience has taught them what every kitchen should have. Ben wanted two dishwashers (one next to the cleanup sink and one at the end of the island) so there's always a spot for dirty dishes. Dinnerware stored on shelves can be grabbed and put away quickly; not having to open and close cabinet doors speeds up the daily routine. Their dishes are from a restaurant supply store. "They're durable, replaceable, and not distracting," Jennifer says. The layout should make it easy for people to move through the kitchen and help themselves. "The kids can get a bowl of cereal without coming into the cooking area," Ben says.

To save steps, Ben wanted the island close to the range, so the aisle is only 32 inches wide, rather than the typical 42 inches. For the flooring, oak planks were cut and laid in a chevron pattern. The Johnsons diverted traffic from the cooking area by putting a bar sink and the refrigerator on the opposite wall. Black knobs and pulls look understated on the dark gray cabinets.

Surfaces work hard (tile in the primary bath runs floor to ceiling), and, like those signature items on the menu, Jennifer says she and Ben had their have-to-have moments. One was the bridge faucet on the island. "I saw it and I loved it and I had to have it," she says.

Their restaurant sensibility carried over to the rest of the house with welcoming spaces for any occasion. The living room is great for groups, the den is more of an escape, but there's a natural flow between them. Pocket doors can close off the den from its counterpoint, the light, bright living room.

Ben and Jennifer turned the formal dining room into what they call a cavelike den for reading and watching TV. Variations of the deep blue repeat in smaller doses throughout the house.

An upstairs addition gave Ben and Jennifer a bigger bedroom and their own bath with a double vanity. French doors in black steel bring an industrial touch to the primary bedroom. 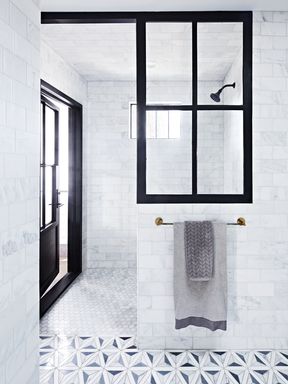 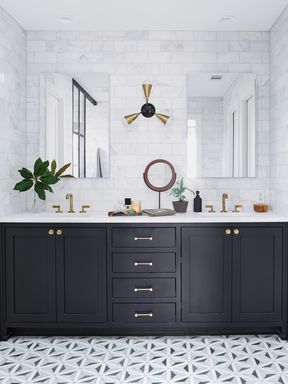 A glass shower wall that looks like a window hints at another surprise: an exterior door that opens to an enclosed porch, "where you can step out in your bathrobe." Jennifer's first thought: Why? Her second: Well, why not? "You're going to spend a lot of mundane moments in your bathroom," she says, "so it's nice to introduce something that's quirky and fun."

One end of the upstairs hallway became Ben's home office and the boys' study spot. The doors lead to a balcony on the front of the house. Like a modern version of wainscoting, blue-gray paint covers the lower half of the hallway walls and doors, lining up with the base of the wall-mount bookshelves.

Lisa is a home writer who brings more than three decades of knowledge to Better Homes & Gardens. Her work has appeared in a host of home publications including Country Home, Southern Living, and Traditional Home, and she has produced more than 1,000 home articles during her career, making her one of the leading experts in the field of home design. She is a former editor for ATLANTA Magazine and is currently a contributing writer. 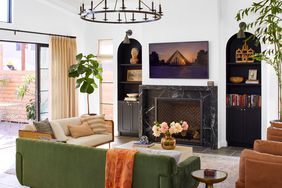 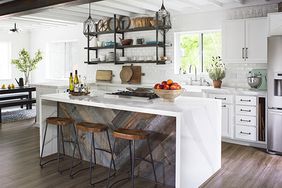 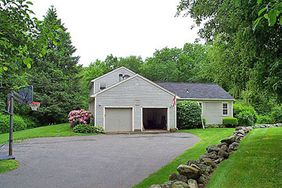