A 3,400-square-foot luxury apartment in Manhattan's tony TriBeCa neighborhood is a testament that dreams can come true. For Bethenny Frankel, it began with an inspiration book and culminated in the home (and ultimately the life) of her dreams.

The reality star turned Skinnygirl creator, business mogul, and soon-to-be five-time author cataloged a collection of favorite furnishings and design ideas when living as a single woman in a one-bedroom apartment long before her career-changing appearance on television's The Apprentice: Martha Stewart. "I made this book 15 years ago of things I wanted but never could afford," she confides.

The collage of ideas proved beneficial when she renovated her new three-bedroom, three-bath digs last spring on her Bravo reality show Bethenny Ever After. Fans watched the trials and tribulations of the design process play out on weekly episodes covering everything from selecting the perfect powder room tile to dealing with prickly contractor situations.

The old saying "all the world's a stage" is not a new concept for Bethenny; her life has been an open book for the past several years. A stint as one of the original Real Housewives of New York City (sans husband) led to her show as a mother (daughter Bryn is now 2) on Bethenny Ever After.

Taking a page from Martha Stewart, her first TV boss, she sold her Skinnygirl line to Fortune Brands' Beam Global, landing her a cover on Forbes magazine as "one of the new celebrity money-makers." She also envisions a home collection one day, "with pieces that would be unique, limited, and affordable."

She hired New York designers and mother-daughter duo Mariette Himes Gomez and Brooke Gomez after seeing their work in a design book. The "Gomez Girls," as Bethenny affectionately calls them, are known for sophisticated and serene interiors filled with clean lines and neutral tones in comfortable and contemporary settings. "I loved the film Something's Gotta Give, which reminds me of their style," says the 42-year-old entrepreneur. "They are very high-end. I think I may have taken them out of their comfort zone!"

This before photo shows Bethenny Frankel's empty living room before the "Gomez Girls" brought it to life.

Designing with a camera crew in tow was no doubt challenging, but the seasoned designers took it in stride. "We worked as a team and had fun. There were a lot of moving parts with the contractor, architect, etcetera—but at the end of the day we all worked well together," Brooke says.

After: Bursting with Inspiration

A starburst chandelier from Bethenny's inspiration book was the starting point for the apartment's designs. Bethenny purchased the American flag painting that hangs by the dining table from a street vendor in SoHo. The spiral diptych, seen on the opposite wall, is by Chuck Soldano.

"It all started with the [starburst living room ceiling] light fixture," explains Brooke. "The inspiration book was the bible. It is very helpful to have clients know what they like. Bethenny wanted calm and a 'less is better' approach. She knew what she wanted, and there was no hesitation. And that truly drove the process as a whole."

Furnishings are a mix of designer fabrics, custom wallpapers by Ted Tyler, and upholstery from Mariette's line at Hickory Furniture coupled with Bethenny's finds at Ikea, Restoration Hardware, and CB2. Many became plot points of the show, such as the purchase of the jewel-toned tile for the powder room and the American flag artwork. "I knew I wanted something from a vendor who was a New York artist," Bethenny says. Lack of clutter and practicality is the order of the day. "I am a use-what-you-have type. I am all about not having a lot of stuff I don't need."

The cream-and-beige palette in the open living and dining space is accented with pops of orange-red, a favorite color for Bethenny and the signature color for Skinnygirl. "Red is my lucky color and a power color," she says. The hue can be found throughout the interiors of her New York City apartment.

A Missoni bicycle, scored by Bethenny at an early-morning Target sale, is a conversation piece in the living room.

Before: Room to Work With

There was plenty of open space to make use of in the kitchen and dining area.

After: Open and Bright Floor Plan

The designers added a built-in banquette for casual seating in the open-plan kitchen.

The epicenter for Bethenny's burgeoning Skinnygirl empire (ranging from wine and margaritas to skincare products) and her books (including The Power of Yes, health and fitness volumes, and her novel Skinnydipping) is the streamlined home office. Walls of off-white laminate with signature red accents (again, Skinnygirl colors) house hidden storage at the touch of a fingertip. With three work-stations and a makeup center, the office mirrors Bethenny's work ethic. "Every single inch is utilized, and it's very organized," she notes. "It's one of the most alive places in the apartment." Plus, there's the whimsy of a Skinnygirl surfboard and oversize gifts from pals Anderson Cooper (microphone) and Andy Cohen (martini glass). A custom laminate cabinet displays Bethenny's Skinnygirl logo and beverage collection.

The walls in daughter Bryn's room were plain and lifeless before the designers took charge.

With a whimsical monkey-patterned custom wallpaper by Ted Tyler and a plush pink chair and ottoman, this bedroom is fit for a princess.

Her pièce de résistance? The to-die-for den-turned-primary-closet. A cloverleaf-backed chair and mirrored dressing table vie for attention with an enviable collection of Manolos, Jimmy Choos, Valentinos, and Birkin bags. ("Every girl has her vice," Bethenny says.) Clearly, it's her favorite room. "I wanted a closet like this my whole life, and finally, I don't have to shove things under the bed."

A jeweled bag on display in the spacious closet bears the eponymous Skinnygirl logo.

Beautiful turquoise in the primary bathroom gives it a spa-like feel.

What's Next for Bethenny

Next up for Bethenny? A daytime talk show: a natural for a woman who is a born talker. Produced by Ellen DeGeneres, "the show offers a fresh perspective and consists of topics [like] what women talk about when men are not around," she says. Her dream guests include Facebook founder Mark Zuckerberg and singer Pink; shows on her pet passions (healthy food and children's schools) are on her topic list.

How does she do it all? "I'm very organized and require everyone around me to be," says the type-A Bethenny. "My schedule is intense, and I am a multitasker. I do not procrastinate, and it's all about checks and balances. I just do it!" An accomplished woman for whom the word "yes" is a mantra, Bethenny's dreams shine brightly. 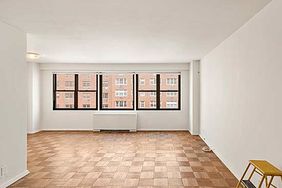 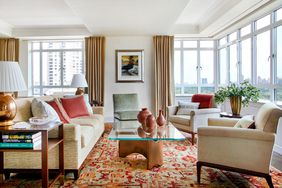 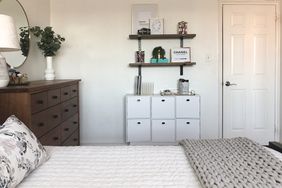 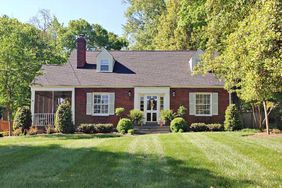 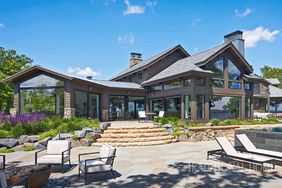 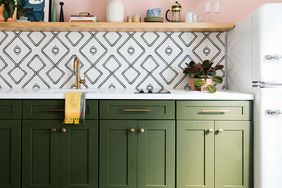