Growing up in Newport, Rhode Island, Brian Paquette developed a penchant for maximalism at a young age.

"Newport is equal parts ridiculously chic and functional," Paquette says. "We're talking sisal rugs paired with Quadrille slipcovers and rattan chairs. All of that inspired me."

As an interior designer, Paquette's adoration of decorators such as Jacques Grange, Markham Roberts, and Bunny Williams is deeply rooted. However, today, based in Seattle, he serves clients whose design briefs lean more toward clean-lined than pattern-on-pattern. His portfolio alludes little to his love of traditional interiors.

Perhaps the aesthetic stars aligned when a charming Cape-style home (complete with shingles, white trim, and a pedigree) came knocking. Located on Whidbey Island, the home has been a summer retreat for the same family since the 1950s and recently passed from mother to daughter. Having fond memories of the home's utterly traditional decor but knowing it needed an update, she reached out to Paquette. Her only stipulations were a plenitude of ticking and a red, white, and blue palette reminiscent of her childhood retreat.

Respecting his client's very specific requests (neither of which had previously been part of his design repertoire), Paquette went back to his Newport roots and channeled his inner Sister Parish.

Proving he has maximalist mettle beneath his modern veneer, Paquette paid homage to the home's thoroughly traditional design while giving it the slightest nudge into modern day. Neutrals and solids were nixed in favor of floral prints paired with paisleys. Trims and tufting detoured his usual clean lines.

"The process was at once comfortable and uncomfortable," the designer says. "There were many firsts for me in this house. I used my first-ever floral print here, my first custom lampshade."

These firsts, along with classic forms, including club chairs, a whitewashed china cabinet, and a button-tufted chaise upholstered in ruby red, are deftly fused with unexpected pieces such as a Giacometti-esque cocktail table, contemporary fabric on the club chairs, and Henri Matisse prints found in Paris. An overall mixed-and-matched, accumulated-over-time aesthetic fills the living room.

For generations, a chest of drawers has made its home in a corner next to French doors that open to a wraparound deck.

Chock-full of family photos and mementos, it serenely stands sentinel, paired with a fresh take on a Shaker-style chair, stained blue. Above it hangs a piece of outsider art (another longtime resident of the house) over a more contemporary painting by Serena Dugan.

A menagerie of textiles feels simultaneously matched and mismatched. Vintage red ticking on pillows contrasts with more abstract fabric on club chairs (although its palette is classic blue and white). Vintage textiles, a blue-and-white checkerboard and a red calico print, form leisurely layers that are seemingly haphazard yet perfectly planned.

"The rules were thrown out," Paquette says. "This is supposed to look like a collected calamity that's not overly decorated."

With a scheme that encapsulates summer, the eat-in kitchen features wide awning stripes that are equally bright, airy, and theatrical. Cabinets in a blue as saturated as the July night sky pop against marble countertops and a white tile backsplash. Gold fixtures and hardware add starlike sparkle.

"The space is a mix of formal and relaxed," he says. "The ticking is outdoor fabric and allows for sand on your feet while eating your bowl of cereal."

Similarly polished and inviting, the bedrooms are studies in the power of pattern. In the master, a dramatically delicate floral fabric swathes a headboard that stretches from wall to wall, interrupted only by a dresser finished with lacquered grass cloth and brass pulls. Ticking with a tape trim adorns windows, relaxed and traditional to the final detail.

"It was so fun to work on a traditional project," Paquette says. "It transformed me. Now all I want is to trim everything, faux bois everywhere. I've yearned for this since I was a kid." 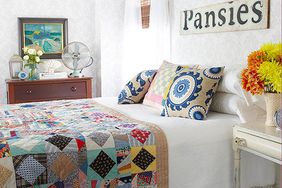 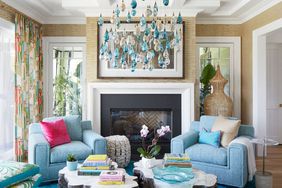 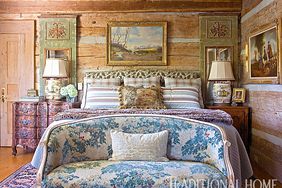 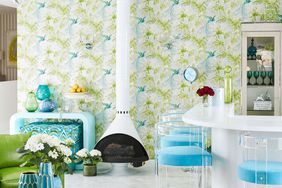 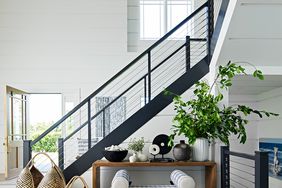 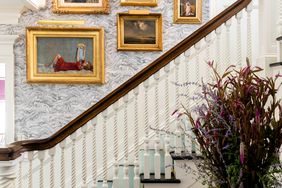 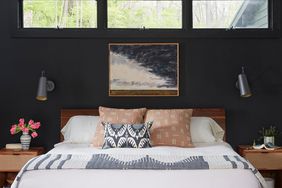