Cathy Whitlock is an interior design professional with a freelance features writer career spanning over three decades. Cathy has covered house profiles and interviews with celebrities such as Meryl Streep, Susan Sarandon, and Sidney Poitier while working as a writer for American Airlines, The Hollywood Reporter, and Better Homes & Gardens. As a freelancer, Cathy has written about film sets and broadway plays for Architectural Digest while also maintaining her own blog, Cinema Style. She has published a book with HarperCollins and is listed as part of the HarperCollins Speakers bureau.

Cathy Whitlock graduated from Parsons School of Design with a degree in interior design. From there, she began a career as a contributing design editor with Meredith Group publications, including Better Homes & Gardens. She also wrote features for Array magazine. Later on, she expanded her repertoire by writing for high-profile design publications like Architectural Digest, covering film and broadway set designs, while also focusing on writing features on celebrity homes. Cathy has written a book about how she channeled her interior design skills into her three-decade career called Re-De-Sign: New Directions for Your Career in Interior Design. 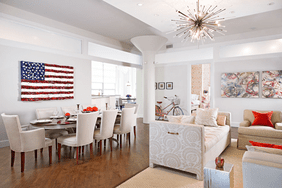